The Golden Eagles will be playing their first playoff game against the 8-1 Hutchinson Salthawks tonight after the cancellation of last week's Valley Center matchup. 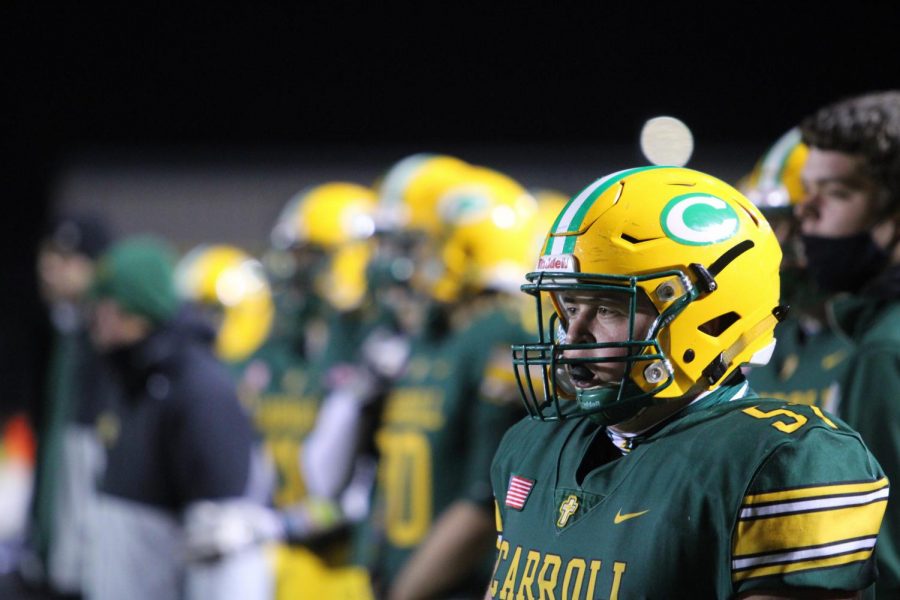 Last week’s cancelation of the Golden Eagles’ first playoff game against the Valley Center Hornets brought about a strange and largely unique circumstance for the team. When asked about the team’s immediate reaction, senior running back Hunter Trail stated, “There was a mixed reaction about our game getting canceled last week. Coach really emphasized being cautious because the season can end just like that. Our mindset immediately after hearing about the news shifted towards our next opponent and getting ready for the next game.”

Over the last few weeks of the regular season, the Golden Eagles seemed to experience a rather noticeable shift in their offense. It seemed like everything began coming together in a big way for the Golden Eagles on the offensive side of the ball. Hunter said, “Offensively we just started to believe in one another and in our execution of the game plan. Our playbook can really open up when we are effectively able to throw and run the ball.”

Aiden added, “It all starts with the big guys up front, we can’t do anything without them. In order to keep this hot streak going throughout the course of the playoffs, we have to continue to find ways to make big plays.”

Despite the Salthawks’ tremendous regular season record, they have shown that they are indeed beatable and contain a select number of weaknesses. When asked about what the main key to a Golden Eagle victory is, Hunter said, “Offensively we really want to go out and attack their perimeter and really test their secondary players early on to hopefully get them to play more down hill and then return with some deep shots. Defensively we need to be physical and stop the run game of Hutch. If everyone does their job and plays confidently that’s what we will need in order to come out on top.”
Adrian’s Thoughts:

One of the major glaring weaknesses of Hutch is its defense that is oftentimes unable to slow down opposing offenses. Because of this, the Salthawks will look to keep their defense off the field by completing and executing long offensive drives. In order to combat this, the Golden Eagle defense will need to consistently get the high powered offense of Hutchinson off the field, along with putting them in unfavorable positions. Despite the impressive offense of the Salthawks, I do expect the defense of the Golden Eagles to step up in a big way and get the opposing offense off the field more often than not, then in turn allowing the Golden Eagle offense to consistently put points on the board. When I got the chance to ask Hunter Trail about if there are any specific points that the coaches have been repeating to the guys this week, he stated, “The coaches have really hit home the point, really throughout the year, that we are a really good football team. We all have really started to believe in each other more and more and have gained a ton of confidence because of it.” This week’s game will serve as yet another stepping stone for the 2020 Golden Eagles in their road to eventually cementing themselves as the 2020 Kansas 5A state champs. Final Score: BC 35 > SH 28.