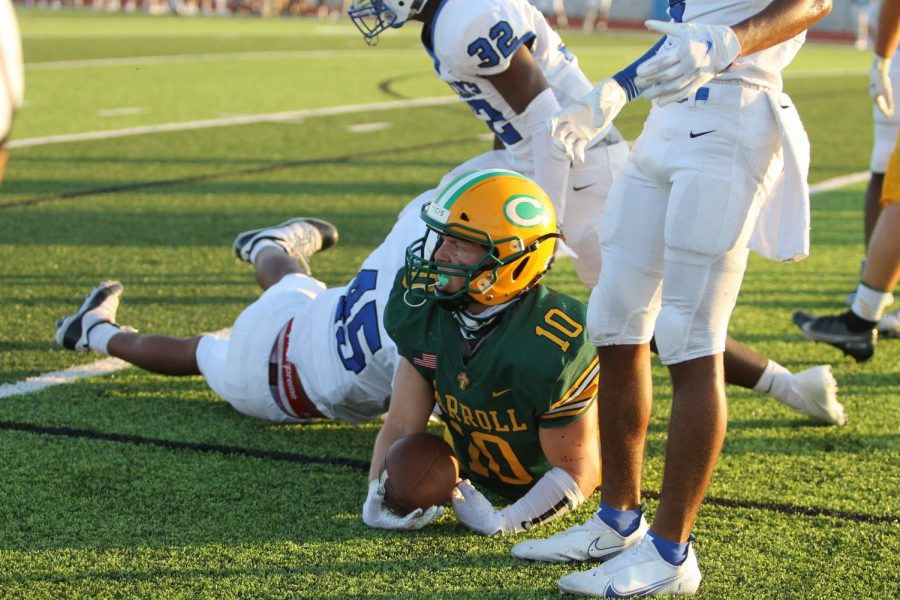 After a relatively slow start for both teams throughout the first quarter, business began to seriously pick up in the second, with both teams seemingly finding their footing on offense.

It seemed to be a relatively grueling night for the defense of the Golden Eagles, with BC routinely having a rather difficult time stopping the rushing concepts of the Kapaun Crusaders, as well as the ensuing play action opportunities the running game was able to open up.

The offenses of the Golden Eagles and the Kapaun Crusaders were able to match each other seemingly blow for blow, with not one team being able to seemingly get one up on the other. Whether it was from one of the insanely talented backs presented by the Kapaun Crusaders, punching it into the end zone, or senior Carroll quarterback Aiden Niedens being able to consistently muster up big plays for the Golden Eagle offense, it seemed like touchdowns were in no way difficult to come by throughout the night.

After a second half full of explosive plays from both teams, the score at the two minute mark in the fourth quarter was  31 to 28 in favor of Carroll. Then, seemingly in a blink of an eye, the game-defining play was made by the Golden Eagle defense, with just under two minutes left in the fourth quarter. It looked as if the driving offense of the Kapaun Crusaders was fixing to punch the ball into the end zone to likely win the game when senior starting safety Cade Gatchet was suddenly able to strip the ball out of the grasp of the Kapaun offense, allowing senior Linebacker Andrew Husband to make the quick recovery to effectively ice the game for the Golden Eagles. The Carroll offense was then able to kneel out the clock and effectively end the game, thus giving the game to the Golden Eagles with a final score of Bishop Carroll 31, to Kapaun’s 28.
Adrian’s thoughts
I don’t think it’s up for much debate that by the season’s end we will be looking back at this week’s match-up and describe it as one of, if not the top, match-up of the year. This game was a pure offensive slugfest with neither team’s offense giving the other side any breathing room throughout the course of the night. In my opinion, the breakout performer of the night would have to be Carroll quarterback Aiden Niedens, who was able to push his offense all the way to 378 total yards on the night, as well as routinely making great throws, putting his offense in great position to put the ball in the end zone. It will be incredibly interesting to see how Coach Trail will look to prepare his group to go up against the always elite and high powered Derby Panthers next Friday night in BC Memorial Family Stadium.