The Playoff March Begins: BC football takes on Valley Center

Bonus coverage: A look back at last week's W 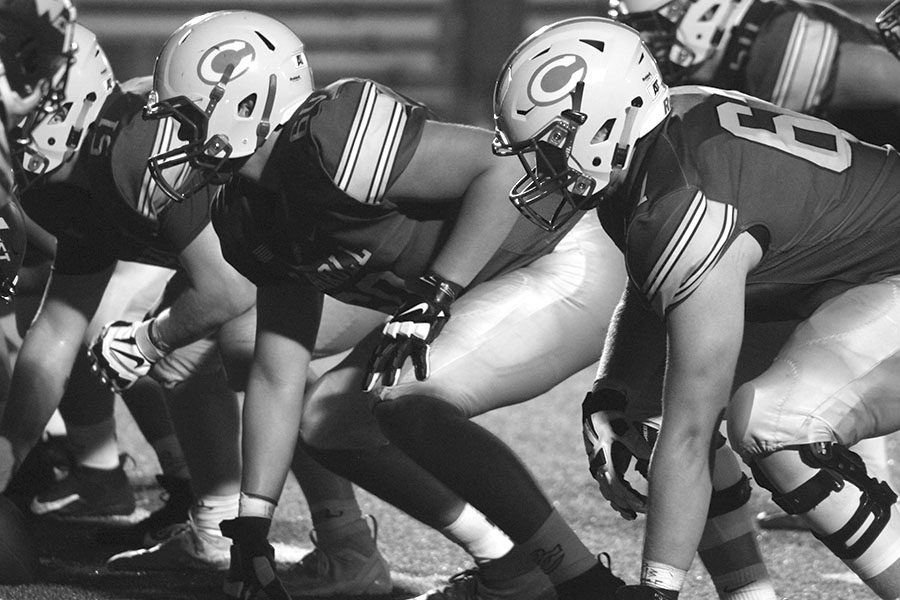 BC opens the playoffs against Valley Center. The line will be a key, as always.

So Far:
Bishop Carroll: The Golden Eagles have been red-hot as of late, coming up with wins over their last four contests. This win streak has mainly been predicated on the dominant performances put forth by the Golden Eagle defense, which is being led by seniors Dalton Nichols and Phoenix Smith as well as defensive coordinator Coach Nance. When asked about the tear the defense has been on lately, Nichols said, “The key is just playing together and playing at the highest level we can. When we do that, we make plays and make stops.” The offense has also been exceptional over the previous four weeks, with Aiden Niedens and Hunter Trail beginning to establish themselves as game-changing playmakers that can break a game wide open on any given play.

Valley Center Hornets: The Hornets (ranked 20th by MaxPreps) are currently having a hard time getting wins, leading to them to be on a two-game losing streak. Despite this, the Hornets remain a very talented team on offense with their quarterback Kaled Harter throwing for over 1,000 passing yards and running back Marion Ponds having 573 total yards on the season. Receiver Gabe Philips has also been producing 69 total receiving yards per game. The Golden Eagles will have an interesting challenge going up against this particular offense that can hurt you through the air as well as on the ground.

Who’s Hot:
Bishop Carroll: Hunter Trail (RB): Hunter Trail has consistently been putting up solid performances all season. During the team’s previous game against North he was able to run the ball into the end zone two times. When you watch Hunter play, you cannot help but to think that he reminds you of a young Christian McCaffrey with his ability to see the holes in his offensive line and being able to hit those holes with exceptional speed and quickness. He was able to lead the Golden Eagle running game to 301 rushing yards last Friday. Look for Hunter to see even more opportunities beside quarterback Aiden Niedens as the playoffs begin to commence and in turn take over even more games for the Golden Eagles.

Bishop Carroll: Phoenix Smith & Dalton Nichols (Defense): Phoenix and Dalton have shown to be exceptional leaders as they continue to build an extremely close bond and a general comradery with the rest of the defense. The consistent game changing plays that they are able to produce are some of the things that separate good players from the great players. The leadership abilities that they display each week are what separates good leaders from great leaders. It is these qualities that the team must lean on if they are to truly make a deep run at the state title, and thus sending these two talented players out of Carroll with a state title.

Prediction:
Expect for the Golden Eagle defense to suffocate the Hornets offense and put them into a bind early. But this will be after an early score by the Hornets. The Golden Eagle offense will continue their dominant stretch with the team scoring four touchdowns, three coming on the ground, one coming through the air. Final Score: BC 28-7

Quotes of the Week:

Dalton Nichols on the keys to the team rallying following the difficult loss to the Derby Panthers earlier in the season:
“The key has been focusing on improving every week and getting ready to make a deep run in the playoffs. Losing to a team like Derby or Northwest only motivates us more, because well most likely see teams like that in the later rounds of the playoffs.”

Dalton Nichols on the keys for the team making a deep run in the playoffs:
“It is all about playing together. We gotta play with a lot of heart and improve in every area of the game. We can’t become complacent, we need to improve every week and just play football.”

Key Takeaways:
Golden Eagles: The Golden Eagles, led by Aiden Niedens and Hunter Trail, moved the ball with ease Friday night. The offense was able to consistently punch the ball into the end zone, off of some exceptional play from their defense led by seniors Dalton Nichols and Phoenix Smith. The defense was able to minimize the amount that standout seniors Joshun Grant and Jashua Huggins were able to affect the game on the ground. They were successfully able to complete the goal of stopping the Titans talented running game. On the offensive side of the ball, Aiden Niedens seemed to have his coming out party at just the right time, with the playoffs approaching. He was looking for his star tight end Max Bullinger. He was also able to break off multiple long runs that caused the demoralization of the Titans’ defense. Star tailback Hunter Trail was able to punch the ball into the endzone three times off of three long runs. He led the running game to 309 yards on the night.

South Titans: The Titans struggled to show off their identity of being a power running team against the stout Golden Eagles Defense. They were often unable to stop the Carroll offense from constantly moving the ball up and down the field. The offense did not help the defense though, they were only able to produce 189 yards over the course of the night.

Going Forward:
The Golden Eagles are kicking off their first game in the High School 5A Football Playoffs, with their first test being against the Valley Center Hornets (ranked 20th by MaxPreps), who are coming off of a difficult loss to Eisenhower, losing 28-6. The Golden Eagles will look to put up a dominant performance to begin their playoff run, thus increasing their win streak to five.