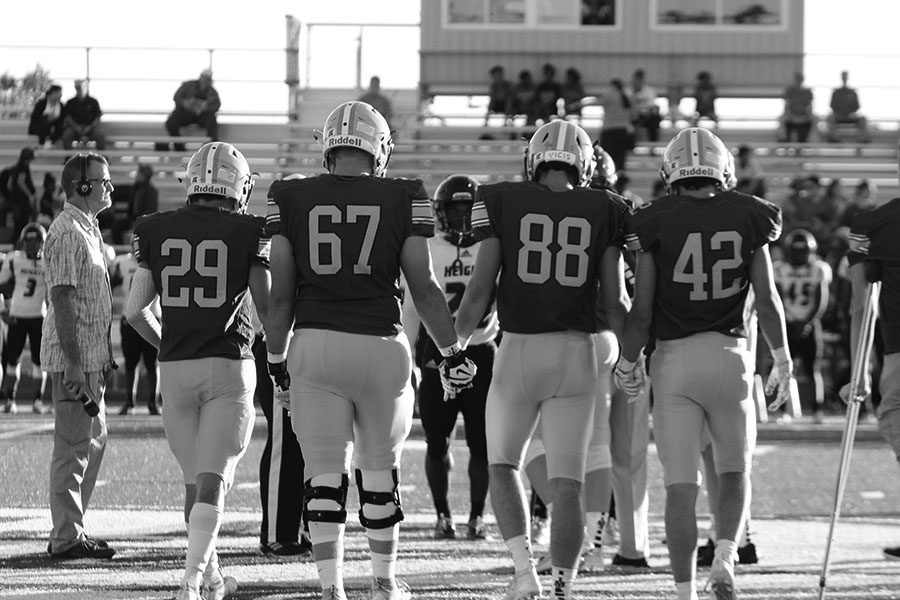 After a loss to Derby, BC looks to bounce back against Great Bend.

The Golden Eagles (Ranked 11th by Eagle) are coming off of a difficult loss against the Derby Panthers. BC will look to be highly motivated going into this week  in order to get back to its winning ways. The Great Bend Panthers currently stand at 2-2, winning against Andover and Hays, but falling short against both Northwest and Dodge City over the past two weeks.

Who’s Hot:
Great Bend: Dalton Miller (QB): Dalton Miller is a true dual threat quarterback, being able to be equally dangerous with his arm as well as his feet on any given play. Against Dodge City, he was able to rush for 217 yards as well as 3 touchdowns on 27 carries.

Bishop Carroll: Dalton Nichols (S): Dalton Nichols is proving to be a tremendous asset to the Golden Eagles both on and off the field. He is the anchor of the Golden Eagle defense, and he is also one of the influential leaders for the team. He was able to come away with a beautiful interception early in the Derby game last week, where he undercut a throw down the seam that was intended for Panthers star tight end Jacob Karsak in the first quarter.

What to watch for: Great Bend: Look for the Great Bend Panthers to attempt to continue their success rushing on the ground, specifically with Dalton Miller. They will also attempt to implement their star receiver, Alex Schremmer, into the mix very early.

Bishop Carroll: The Golden Eagles will be looking to bounce back against Great Bend this Friday. The D will need to plug up their gaps in order to stop Dalton Miller.

I expect to see the Golden Eagles coming out firing on all cylinders tonight, desperate to not fall to 2-3 this week against the Panthers. Expect for the game to be close early as each team feels out the opponent’s defense. But the Golden Eagles will begin to strike midway through the 2nd Quarter. Final Score: BC: 41>GB: 12

Quotes of the Week:

Coach Nance on containing Dalton Miller:
“We have to keep him in the pocket, our defensive line has to do a good job of containing him. We’ll have to utilize one of our linebackers to spy on him.”

Coach Nance on containing Great Bend’s offense:
“Our secondary will be challenged. They will run a lot of vertical routes, combination routes, our secondary must step up and make plays when they throw it. We have not seen a passing attack like this all year. It will be a big test for us.”