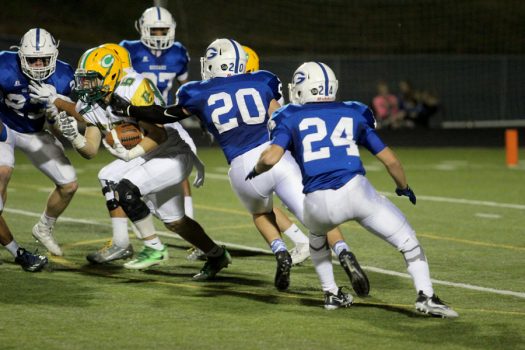 No matter what happens tonight, this will be the last game in the Wichita metro area for the Eagles. That’s right, the state semifinals are already here. In this winner-take-all game, the Eagles take on the Goddard Lions on the road. The game will be a battle of two of the best teams in the state led by two of the best quarterbacks in the state, in Blake Sullivan and Braden Howell. However, similar to the semifinal game between these two teams last season, one of the quarterbacks is dealing with a significant injury. Last year, Howell was playing with a broken foot which most likely impacted his performance in Carroll’s 20-12 defeat. This year, Sullivan is playing with a separated shoulder. Despite this injury, Sullivan should still prove a threat on both the ground and in the air as he will try and give his all in what could potentially be his final game. Being the 5A No. 1 seed for this part of the bracket, Goddard is well-rounded and can handle Sullivan’s injury. In the second half of last week’s game, freshman quarterback Kyle Semrad filled in amicably by throwing a pair of touchdowns both of which went to senior receiver Owen Beason. For Carroll to avenge last season’s defeat, look for Riggs Robben, Isiah Carter, and the rest of the defense to take advantage of the uncertainty at quarterback for Goddard. Also look for Carroll to ride the hot hand, multi-position player Zach Roth, as the Eagles will most likely use him in the wildcat formation some again tonight.

Tonight’s game should be one of the best high school football games that the state of Kansas will see all year. With that being said, expect to see the best of both teams and an extremely physical game. SCORE: Bc 28, Goddard 24