This Week in Sports: A High School Athlete’s Take on the Anthem Protests 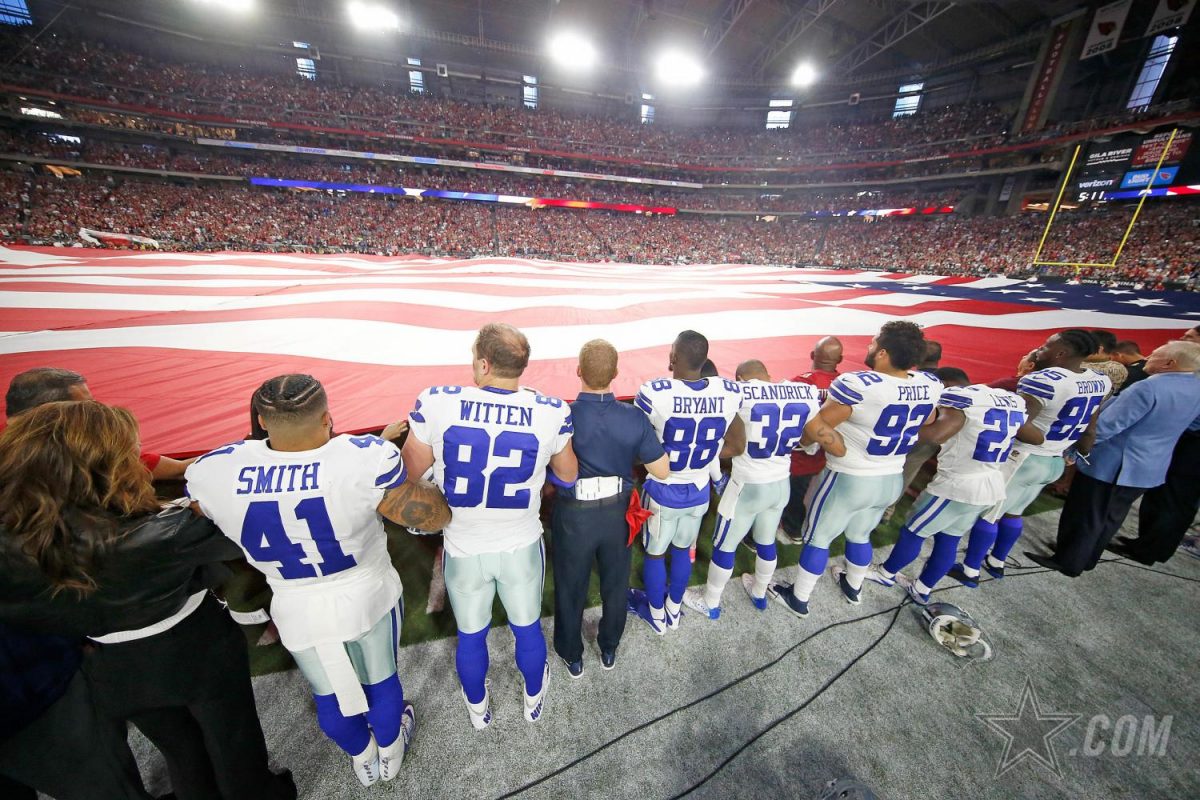 In the past week, Donald Trump asked for NFL Owners to release any players who protest during the National Anthem. As a result, all of the NFL teams displayed some form of unity either before or after the Anthem, with most teams locking arms and kneeling. One exception to this is Army Veteran Alejandro Villanueva, a Steelers lineman who came out onto the field during the Anthem while the rest of his team stayed in the tunnel. These protests have garnered a lot of discussion among sports fans and players alike, so I thought I’d give my take on the issue.

For those of you who don’t know me, I bowl varsity for Bishop Carroll. One of the things that I like about bowling tournaments, not just in high school, is that every single one of them starts with the bowlers going out to the lanes and standing for the National Anthem. I am always amazed that the bowling alley is able to fall so dead silent that all you hear is the singing of the Anthem and if you look around all you see is people standing, hand over heart, facing the flag.

Until these protests started, I hadn’t realized what exactly our Anthem stood for, but now I realize that while we have the Constitutional right to freely express our views, the Anthem is not a very good place to do so. As a high school athlete, especially as a senior, you have so many people looking up to you, whether it’s your little sibling and their friends or the freshman who just barely made the team. With these people looking up to you, they notice everything you do and so if you protest during the Anthem, they will follow in your footsteps and next thing you know, we have a generation of kids who have no respect for what our Anthem means and the many people who have sacrificed all they have to defend the principles that are represented in the Anthem. So instead of “making a statement” by kneeling during the Anthem, if I ever want to see a change in society, I would go out into the community and meet with police officers if I think they are being too brutal or with my local politicians if I wanted to see a policy changed.

I’m the type of guy who doesn’t get “fired up” on a whole lot of topics, and I’m not over the top upset about the protests, I just feel that the only thing that players are accomplishing by protesting is just letting people know that they are standing for something but at the same time actually accomplishing very little other than angering President Trump. So in my opinion, actual actions speak much louder than words and if the NFL players want to see change, they should get out and do something about it, not just kneel for the Anthem.